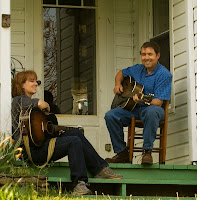 Today we are officially re-releasing our music made in yesteryear for another breath of life in the modern format.
As usual we bring them to this current format when the future of the CD is uncertain in the music business. LP's faded after the original release of our Heritage LP and cassettes were endangered when we released it 7 years later. Digital downloads are becoming an increasingly popular way for folks to purchase music by the 'song' or by the album. For the next week or so we will be the only source for purchase of our music in the standard CD format. We intend however to distribute them to some wholesale to sources like County Sales in Floyd VA and Elderly in Lansing, Michigan and to consign some with local outlets like the Willis Village Mart and the Pickin Porch in Floyd. The package we have produced is much more than just a burned disc with songs in some order on it. It really is a replicated CD product with a unique blend of art and information that one doesn't get with a digital download. To hold something in your hand that has really nice photos and historical or biographical information means so much to us whenever we buy CD's of other folk's music.

Knowing about where it comes from and who performed it on what instruments is something trivial but really is what makes the difference in a connoisseur and a casual listener. We have taken an approach to 'picking and singing' that on the surface seems narrow to some critics, but, the more you read and learn about the development of country music the better understanding you would have for why we do what we do. We tend to be preservationist of the broad genre known as Early Country Music first and creators within that sub-genre Old-time Country Duet Singing, secondly.

We became collectors of old recordings from the days of our parents and more so of our grandparents. It was an evolutionary process by which we got to the point of our interest in this genre in originally making the selection of materials for these CDs now available. More specifically, as young folks in our 20's we began to focus our taste on 'acoustic' as opposed to 'electric' music fascinated more by the natural sound that a player could create on natural materials. ie, the wood of a large tree to build a fiddle or guitar as well as the rural instrument maker's use of the hide of cat or groundhog stretched over a hoop with a neck and strings to make a banjo. Combined with a sense of melody and rhythm and influences from the past, rural folks (from these mountains especially) simply expressed themselves in making music for pure entertainment not distracted by the world created by the elctronic revolution. We also discovered the Golden Era of Country Music and its fascinating variety
by listening to re-issues of old 78 RPM recordings shared by our like-minded friends. In the 60's and 70's many of these early recordings were made available for sale in LP format to which we listened and thought of what life and lifestyle would have been like for the singers/players as well as the listeners from the late 20's and early 30's. We realized that rural America's lifestyle at that time was evolving with automobiles, telephones, and record players, still relatively new, not yet taken for granted by most folks who could afford them.

The performances (originally on the 78 RPM format) we listen to were percieved and believed by us and others to be truly honest and deep rooted in family values and local traditions which seem to be endangered in modern times. Unlike the commericialized and over produced pop-country music purchased by today's target audience,
The original target audience for record labels of the 20's and 30's was folks who had grown up with music being a family and local community staple. The songs themselves had subjects of deep emotion that we find just as real today as then. Homesickness, young love, tragic events,
humour, and deep religious faith spoke to us in our background of life experience; as something that we should get on mission to share with our senior audiences as well as to preserve and re-introduce to new younger audiences. Finally, the beautiful harmonies of the singers of the old-time versions we listened to attracted, fascinated and challenged us to creatively produce our own version with back-up that was in keeping with the numerous nuances of the back-up styles we heard on so many early recordings.

So with all that explained clear as mud, We hope you'll at least check out the sound clips. A second listen never hurts either as there is always more
to key in on when you take all background information into account. It is a lifelong challenge to understand and appreciate the huge world of Early Country and Mountain Music. So thanks for your interest I hope you'll continue to grow in your interest of it. Please comment if you like. See the absolute bottom of this page for ordering info.
Posted by Mac and Jenny Traynham at 9:29 AM

You forgot to tell folks that the very first copies that you pulled out of the box were already winging their way down south to your cousins in Covington because they placed the first order. ;-)

I'll be sending my money today! Thanks for going to the effort and expense to make these available again. I'll do what I can to let people know they are available.

Mac and Jenny Traynham
Mac Deep rooted Virginian Age 61 as of May 6 2015 Owner of Mac's Custom Cabinetry, Banjos and More since 1987 Jenny Born and raised in Northern Virginia Age 58 as of July 8 2015 Home health nurse since 1994 Retired in 2011. Currently is an artist,and musician who conducts home workshops 2 children - Ben age 30 Hanna age 28